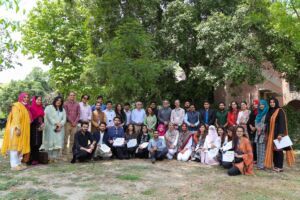 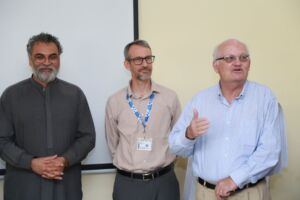 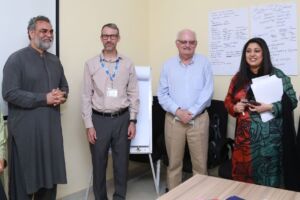 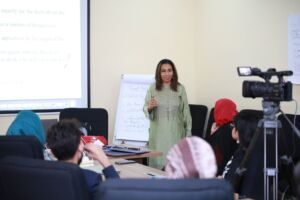 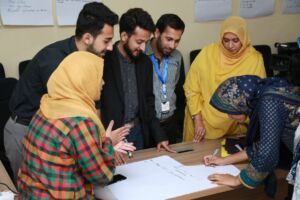 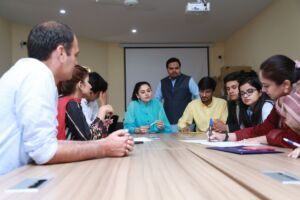 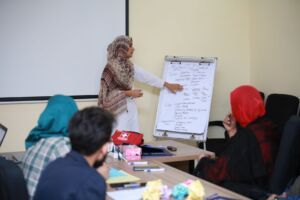 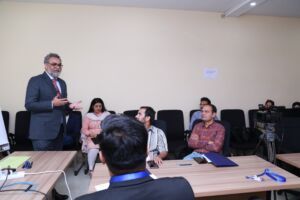 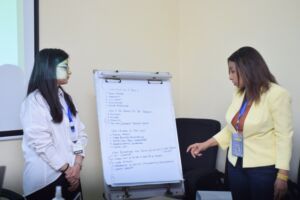 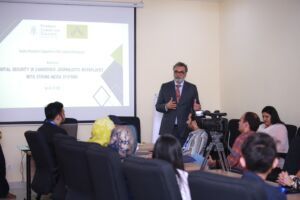 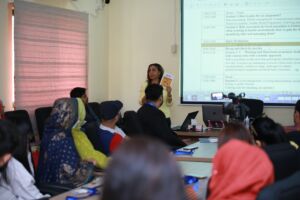 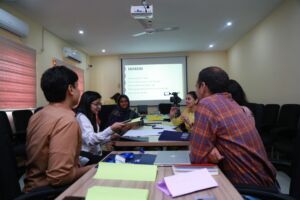 Faculty of Humanities and Department of Mass Communication hosted a four-day workshop on “Journalists’ safety During Conflicts and Working on Sensitive Issues”, from 19th April 2022 to 22nd April 2022. The trainers of the workshop were; Dr Altaf Ullah Khan (Dean of Humanities and Professor of Mass Communication at FCCU), Dr. Abeer Saady (an internationally recognized war correspondent, researcher, and media trainer), as well as Mr. Umer Farooq who is a journalist working for Voice of America (VOA).

On the first day of the workshop, Ms. Rachel Hasan (Chairperson Department of Mass Communication) gave a welcome speech to all the participants and trainers including journalists and academicians from various parts of Pakistan. Dr Altaf Ullah Khan also shared a keynote speech at the commencement.

All the training sessions throughout the four days were conducted by Dr Abeer Saady with various reflections and inputs shared by Dr Altaf Ullah Khan which also gave a local perspective on the conflict reportage in Pakistan. Dr Abeer Saady stressed over the importance of digital securing in the current age and shared various tips to deflect threats faced by journalists. She stated, “safety comes first; good shots or scoops are not worthy at the cost of your life.” A training session was given on situational awareness in times of conflict and Dr Abeer Saady reflected that, “at times when a foreign reporter or a parachute journalist visits a conflict zone, he/she provides a perspective which was there, but could not be spotted by local journalists or fixers in the conflict zone since they have become accustomed to the conflict and everything is normalized for them. Thus, a foreign eye into conflicts is also important and necessary.” When discussing reportage from tribal areas within Pakistan, Mr Umer Farooq added, “while covering tribal areas in Pakistan, at times you don’t have any signals in some places, so you should always have someone you trust at the back end who would contact your editorial board to help locate you if you do not contact for more than 24 hours.”

Moreover, Dr Abeer Saady shared all the considerations a reporter must take before going into or while in the conflict zone; like having a travel checklist, personal preparation, methods to evade surveillance and going through checkpoints etc. Dr Altaf Ullah Khan added his insights into this discussion and shared, “when covering tribal areas in Pakistan journalists should blend in with the people, but it should not be overdone as there is ethnic homogeneity and it is easy for the militants and terrorists to identify an outsider.”

Finally, smear campaigns, online harassment and ways to deal with threats were also shared. Dr Abeer highlighted the psychological issues faced by journalists due to this with the participants. Participants were also given various group activities throughout the training which gave them a chance to put their learnings to practice.

After a concluding speech by all the speakers, certificates were distributed among the participants.

Overall, this training was very informative and insightful for academicians, journalists and students willing to cover conflict zones in future. We hope to see more of such workshops in future.