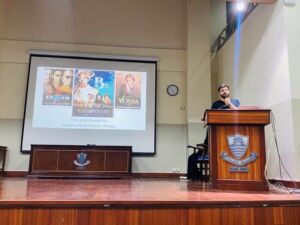 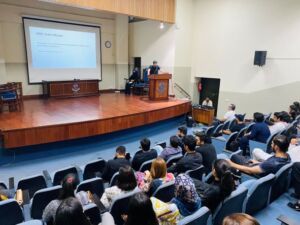 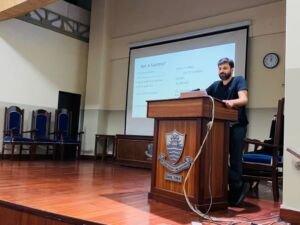 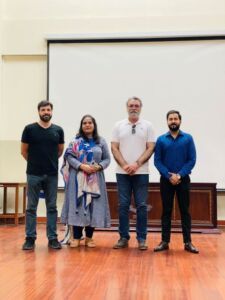 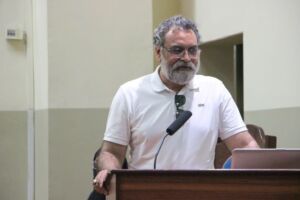 A guest lecture on “Film and Drama as channels for Social and Behaviour Change Communication” was held on June 17, 2022, Friday, at Forman Christian College (A Chartered University). It was arranged by Assistant Professor of Mass Communication, Mr Syed Muhammad Saqib Saleem, for the students enrolled in the course MCOM 415, i.e., Communication Campaign Design. Mr. Fayyaz Ahmad Khan, a public health expert, manager, and social and behaviour change communication specialist who has also produced the first-ever feature film on gender and family planning, Bol graced us with his presence and delivered the lecture. Students and faculty from the Department of Mass Communication, FCCU, attended the session.

He discussed how social and behaviour change communication uses communication strategies based on behavioural science to positively influence knowledge, attitudes and social norms among individuals, institutions and communities. He shared how theories of magic bullet, diffusion and innovation and social learning reflect how we can use film and drama to inspire the audience and trigger the change.

He also shared some demographics on maternal mortality in Pakistan, which showed various social pressures like child marriages and domestic violence being the main instigators behind high maternal mortality. He described how he and his team used puppets for storytelling in far-flung areas to raise maternal health awareness. He said, “We trained 500 ulemas and came up with fatwas that discussed the importance of maternal health, but still it was a huge challenge to bring a change in society as the elites and media were indifferent to our cause. So through Bol, we brought them into the loop and made a film big enough to rattle the society.”

He discussed how the success of Bol led to a bill being passed in the National Assembly on domestic violence and stressed that such films and dramas should be made if we want to see a change in Pakistan.

After his lecture, Dr. Altaf Ullah Khan, Dean of Humanities and Professor of Mass Communication, shared his concluding remarks and presented Mr. Fayyaz with a souvenir along with the course instructor, Mr. Syed Muhammad Saqib Saleem and Lecturer, Ms. Mehwish Batool and thanked him for delivering such an enlightening lecture.